Two Physics Master’s students, Jay Dias and Henry Udeogu, have had papers accepted in Nuclear Instruments and Methods Section B. Both projects were carried out at the Louisiana Accelerator Center under the direction of physics professor Harry J. Whitlow. As Whitlow, who is also the director of the Louisiana Accelerator Center, noted “Acceptance of these papers for publication in a major international journal in our field represents an international stamp of quality on our training of our grad-students. It is especially significant that the students work reported in the papers was done in both interdisciplinary and international collaborations which shows our physics students are able to contribute and compete at a high internationals level.” 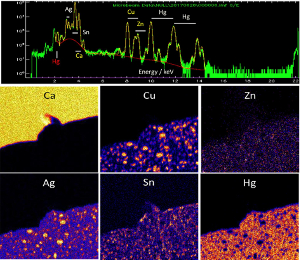 Figure 1. PIXE data from the different elements from area 1 of tooth 11. (Top) Fitted PIXE spectrum. The white bars denote the position of the α and β lines for the elements of interest. K, L and M shell lines are denoted by yellow, white and red text, respectively”. (Bottom) Distribution of major elements determined using the GeoPIXE software. The field size is 1000 x 1000 μm.

Henry Udeogu worked on characterization of mercury pathways from dental amalgam. Henry Udeogu’s project showed that the composition of the biting surface was modified under the action of pressure and chemicals during mastication. This was carried out in conjunction with international researchers from Kasetsart University in Thailand under an agreement signed by College of Sciences dean Azmy Ackleh. Read the paper here. 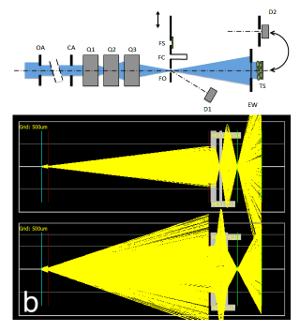 Figure 2. (a) Schematic of the ultra-low fluence irradiation system.(b) Screen shot of the ray trajectories from WinTRAX for 0.4 mm diameter collimator aperture CA.

Jay Dias’s project was quite different and involved building a facility for ultra-low fluence proton irradiation for simulating the effect of galactic cosmic radiation during space travel on biological tissues. This was carried out in collaboration with Dr. Karin Smith and PhD student Debbie Rogers from the Department of Biology. Read the paper here.