Established in 1974, the Ray P. Authement College of Sciences is dedicated to the advancement of scientific knowledge through research and to the extension of the scientific heritage through teaching. In the 2015-20 academic years, the College offered 8 B.S. degrees (Biology, Chemistry, Computer Science, Environmental Science, Geology, Informatics, Mathematics, and Physics), 8 M.S. degrees (Biology, Computer Engineering, Computer Science, Environmental Resource Science, Geology, Informatics, Mathematics, and Physics), and 5 Ph.D. degrees (Biology, Computer Engineering, Computer Science, Earth and Energy Sciences, and Mathematics). Additionally, the College houses pre-professional programs in medicine, dentistry, veterinary medicine, physical therapy, and pharmacy and oversees the program in Military Science. The academic structure of the College as of Fall 2020 is shown in Figure 1. 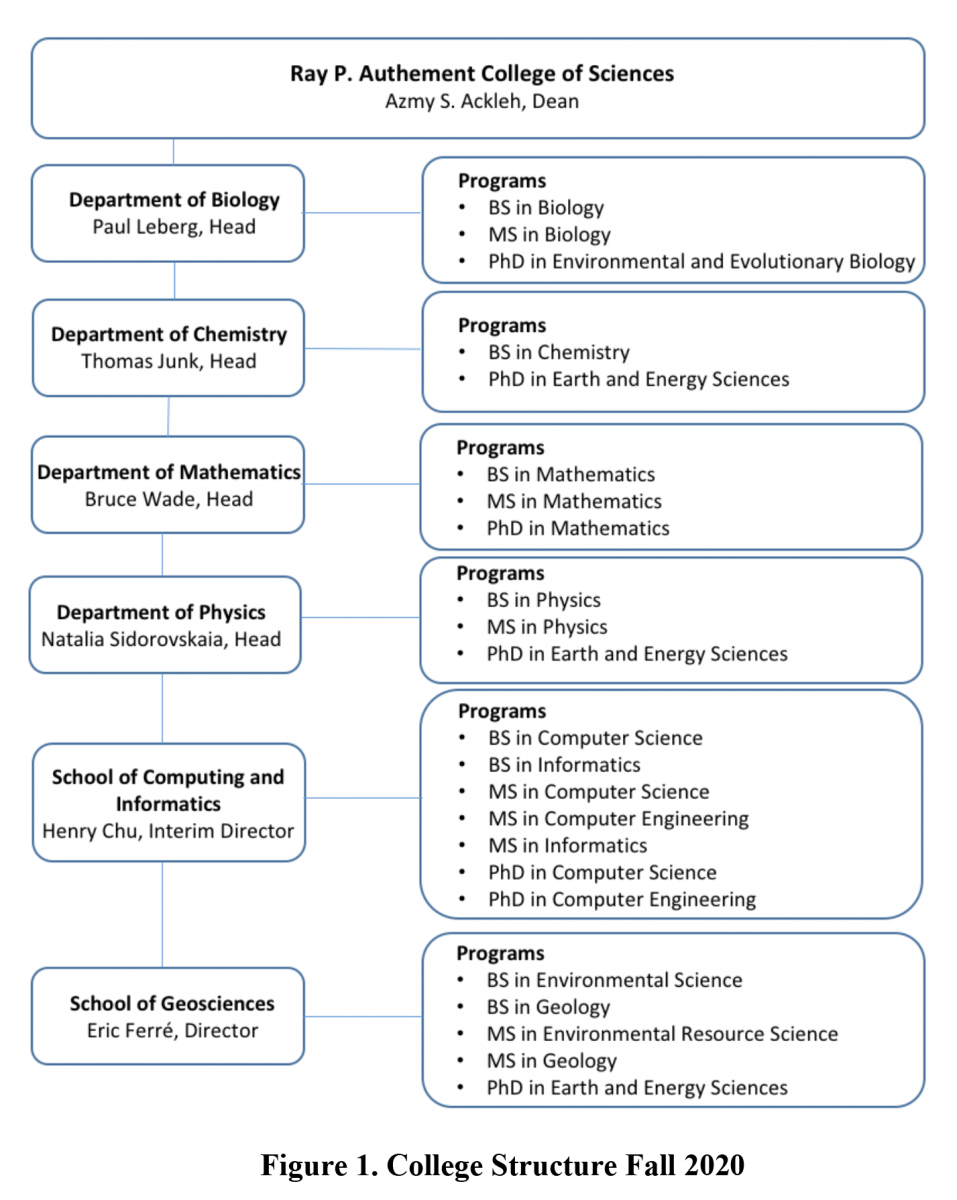 The structure and the many achievements of the Ray P. Authement College of Sciences during the past six years are highlighted in this report and are summarized in the following.

Students: Undergraduate enrollment has steadily increased to an average of 1987 students over the past six years, while the number of graduate students has remained relatively constant at around 300. In contrast to the overall declining university enrollment trend, the total enrollment in the College of Sciences has seen an all-time high of 2375 students in 2019 and stood at 2273 in 2020. Parallel to the increasing enrollment, graduation numbers have seen a steady increase to an all-time high of 376 degrees awarded in the past year. The College of Sciences is a major contributor to the university’s graduate education with an average of 78 M.S. and 18 Ph.D. degrees awarded each year.

Research: The College continued on its path with strong research and scholarly activities. With an average of 205 peer-reviewed journal articles and 47 proceedings publications per year and generating an average external funding of over $14 million per year, the College is one of the most important contributors to the reputation and national and international recognition of the University.

As shown in the bar chart and pie chart in Figure 2, the total number of faculty members in the College in the Fall 2020 semester stood at 127, down by ten faculty compared to 2018 which had reached the highest faculty total (137) ever recorded in the College. Despite this loss of faculty, the College continues making considerable contributions to the University’s mission of research, teaching, mentoring of students, and public outreach. 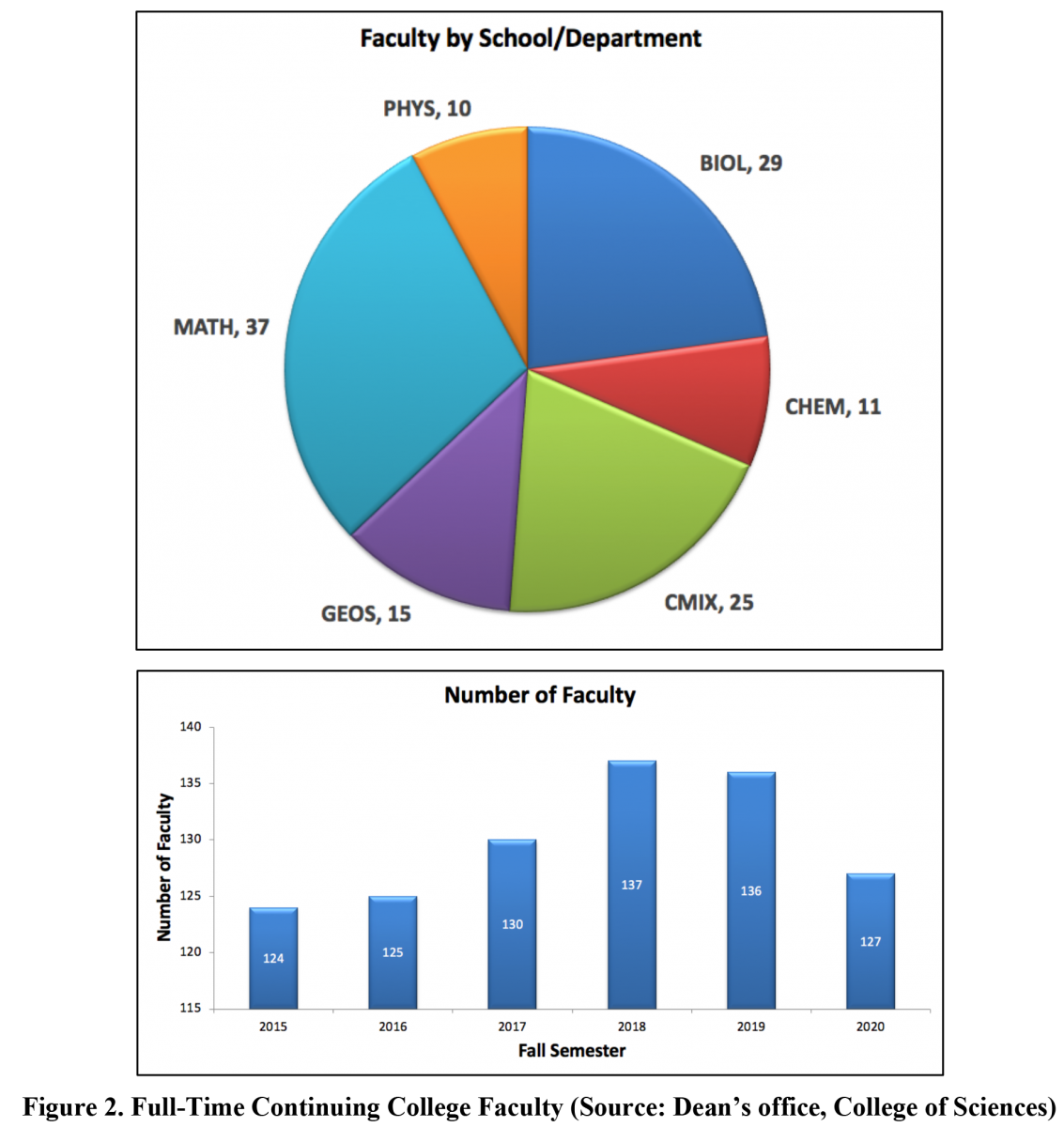 The stacked bar chart in Figure 3 (top) shows the number of Ray P. Authement College of Sciences faculty, relative to the number of UL Lafayette faculty outside the College. It is worth noting that, despite the fact that the Ray P. Authement College of Sciences faculty comprise only 20.6% of the total UL Lafayette Faculty (6-year average), the research publications, grant awards, and graduate student graduation rates are substantial. 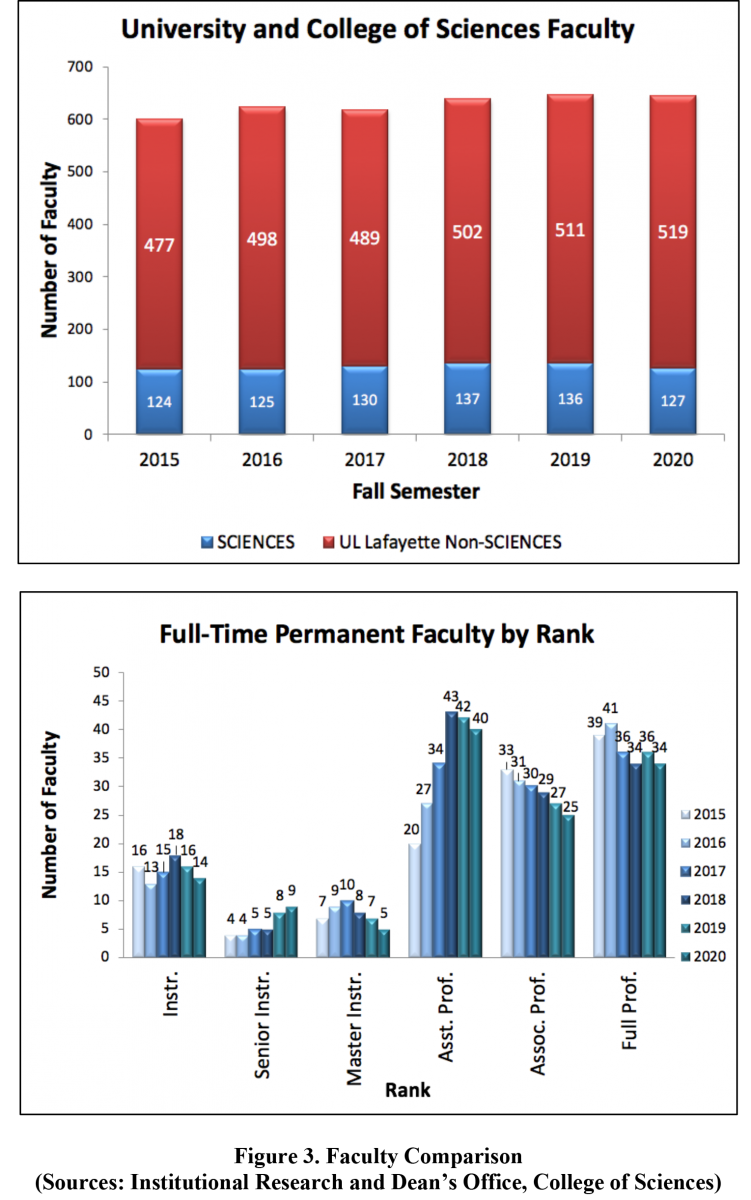 Our remarkable faculty advance along two career tracks: the Instructor track which emphasizes classroom, laboratory, and field instruction, and mentoring of students; and the Professorial track, which emphasizes teaching, research, publishing, and mentoring of graduate students and post-doctoral fellows. Those faculty members who excel in the Instructor track progress from Instructors to become Senior Instructors and eventually may become Master Instructors. Those faculty members who excel in the Professorial track progress from Assistant Professors to become Associate Professors and eventually may become Full Professors. The lower bar chart in Figure 3 shows that faculty members of the College are well represented at each rank and that the number of Assistant Professors has doubled over the past 6 years. The number of Associate Professors has constantly decreased, while the number of Full Professors has seen only a minor decrease.

The chart in Figure 4 shows the total number of students taught in lecture, laboratory, and field classes in the Ray P. Authement College of Sciences for the Academic Years 2014-2015 through 2019-2020. Currently, our faculty are teaching classrooms and laboratories, and field courses containing more than 36,700 students each year, approximately one-fourth of the total number of students taught across the University. The observed trend of decreasing student enrollment in classes since the 2015-2016 academic year taught by the College of Sciences is parallel to the overall trend of decreasing student numbers at the entire University. 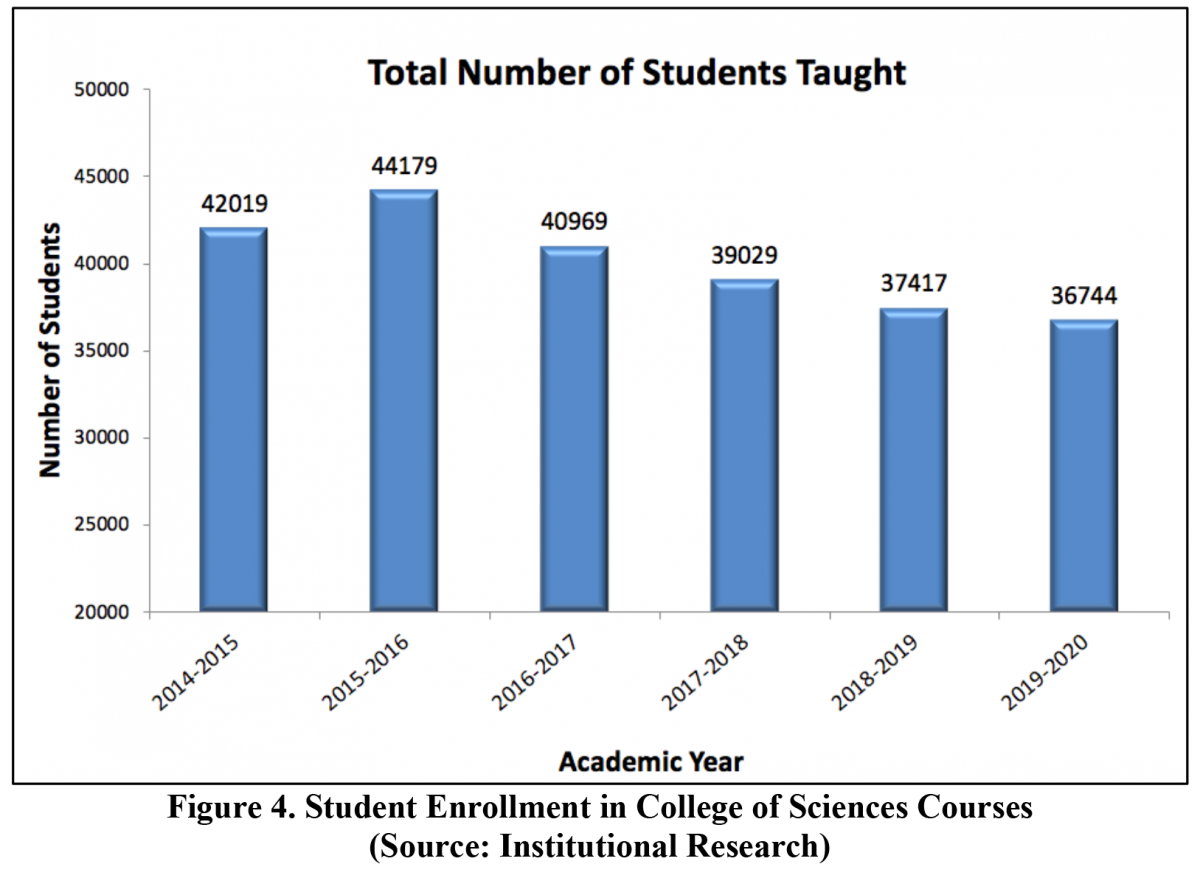 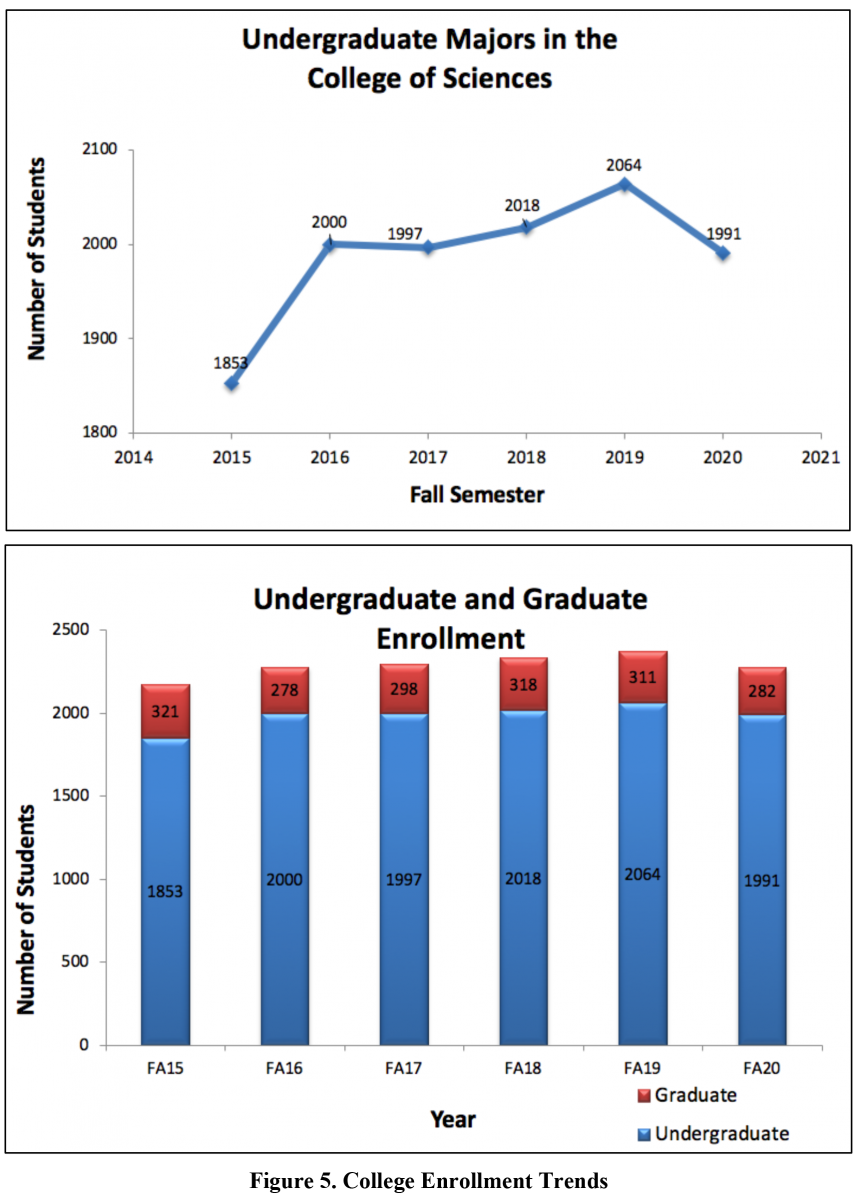 The line chart in Figure 6 shows the number of undergraduate degrees awarded for the academic years 2014/2015 through 2019/2020. During this period, we awarded an average of 241 Bachelor of Science diplomas each year. 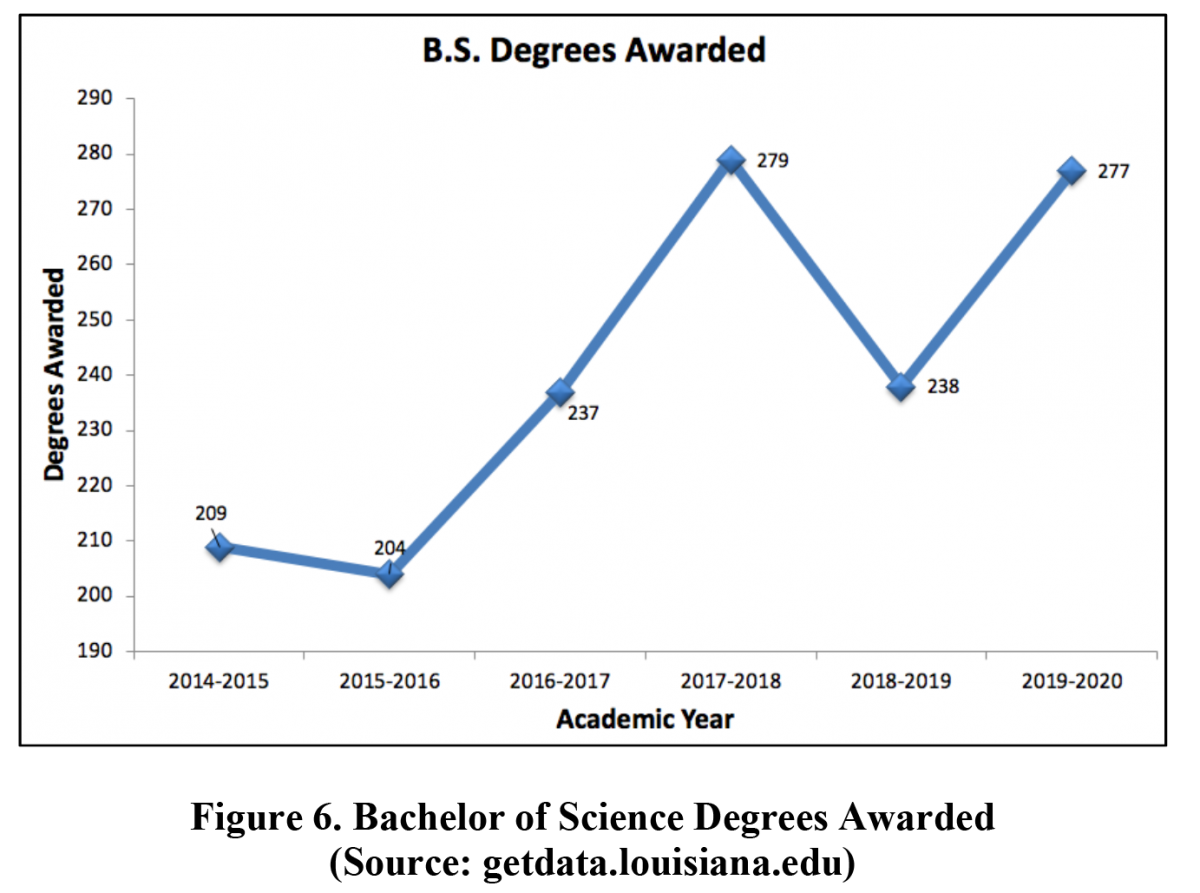 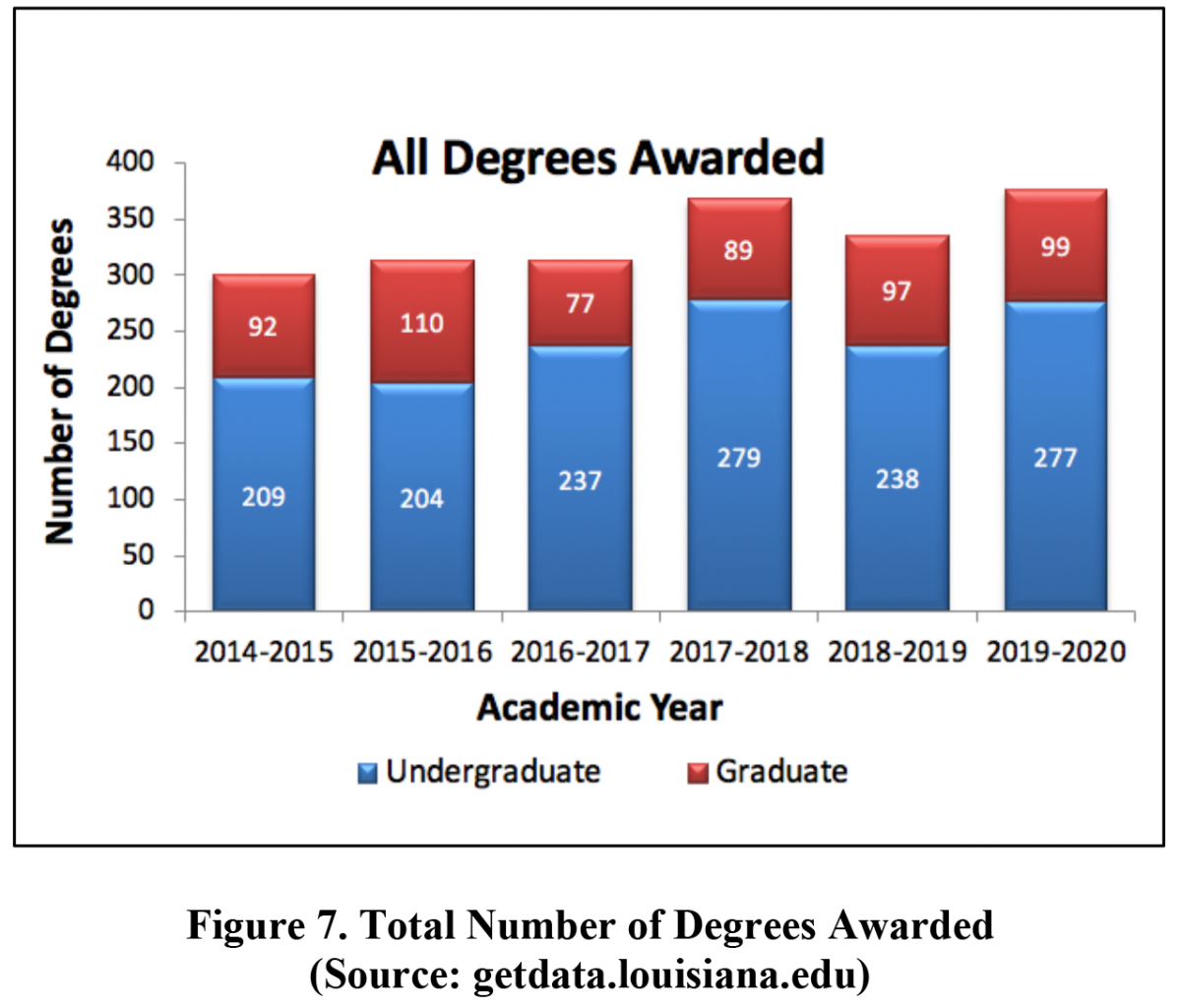 The Ray P. Authement College of Sciences cautiously expects to continue growth in the next few years. With the exception of Fall 2020, undergraduate enrollment has been steadily increasing over the past decade. Graduate enrollment has been relatively stable but is projected to increase as new graduate degree programs in Earth and Energy Sciences and Industrial Chemistry are being implemented. In the workforce, demand for STEM graduates is expected to increase. This expectation is supported by predictions by the U.S. Bureau of Labor Statistics (https://www.bls.gov/emp/tables/stem-employment.htm), which anticipates an employment change of +8% between 2019 – 2029 in the STEM disciplines compared to a 3.4% growth in the non-STEM occupations. According to the U.S. Bureau of Labor Statistics the average wage for all STEM occupations was $87,570 in 2015, nearly double the national average wage for non-STEM occupations ($45,700). Ninety-three out of 100 STEM occupations had wages significantly above the national average wage for all occupations of $48,320 (https://www.bls.gov). These data indicate continued demand for STEM graduates and suggest stable or growing enrollment numbers in the College.

Faculty members of the College of Sciences engage in significant research among other scholarly activities. The charts in Figure 8 illustrate that our faculty publish on a consistent basis in peer-reviewed journals and conference proceedings, with an average of 205 articles and 47 proceedings per year over the past six years. 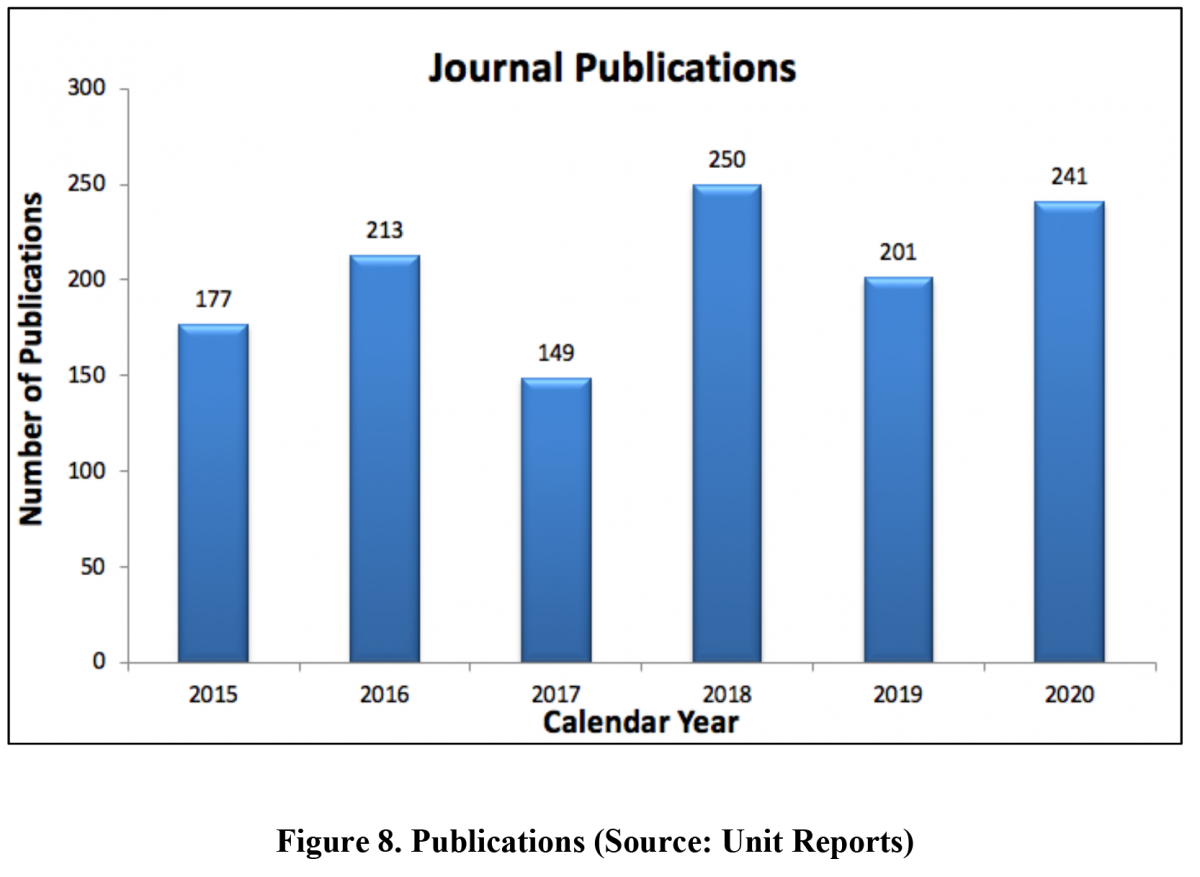 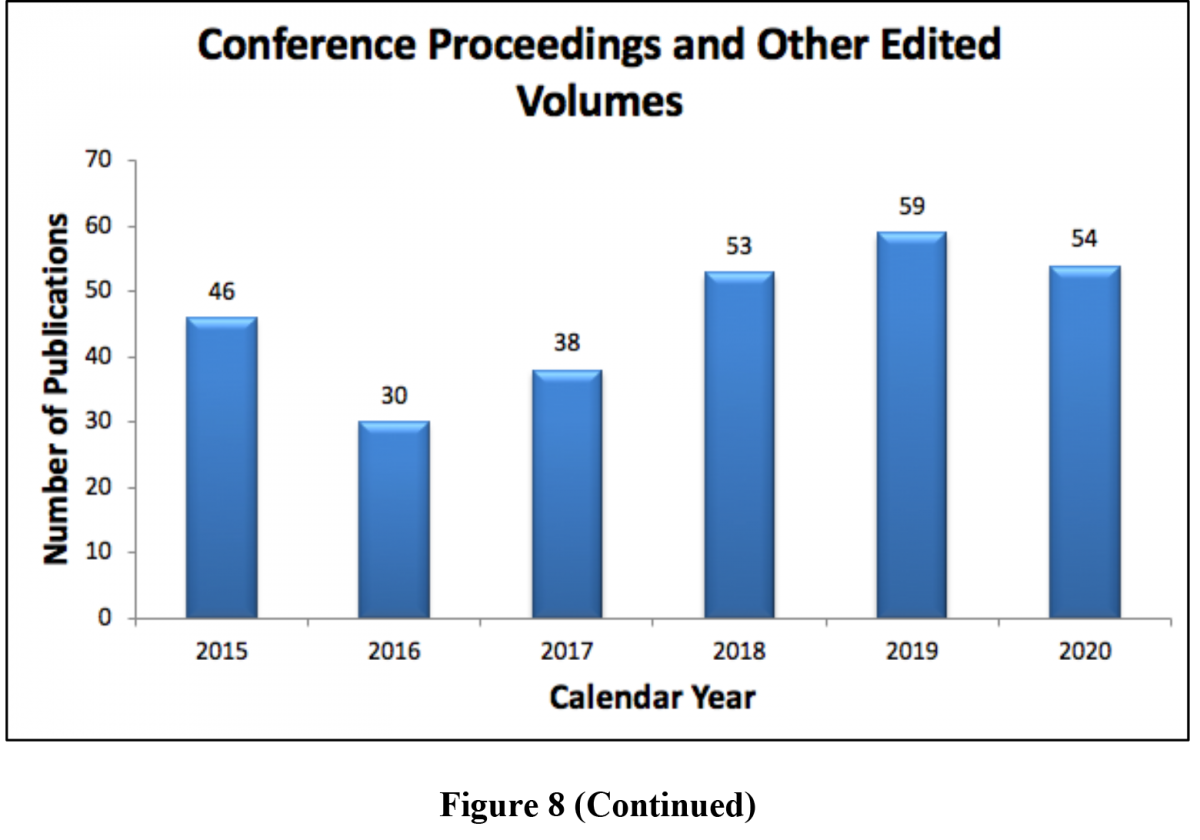 The bar chart in Figure 9 illustrates the level of success of our faculty to obtain externally funded grants and contracts.  During the period spanning the fiscal years 2015-2016 through 2020-2021, faculty of the Ray P. Authement College of Sciences were engaged in externally funded research as Principal Investigators or as Co-Investigators totaling $84,194,572 (averaging over $14.0 million per Fiscal Year). 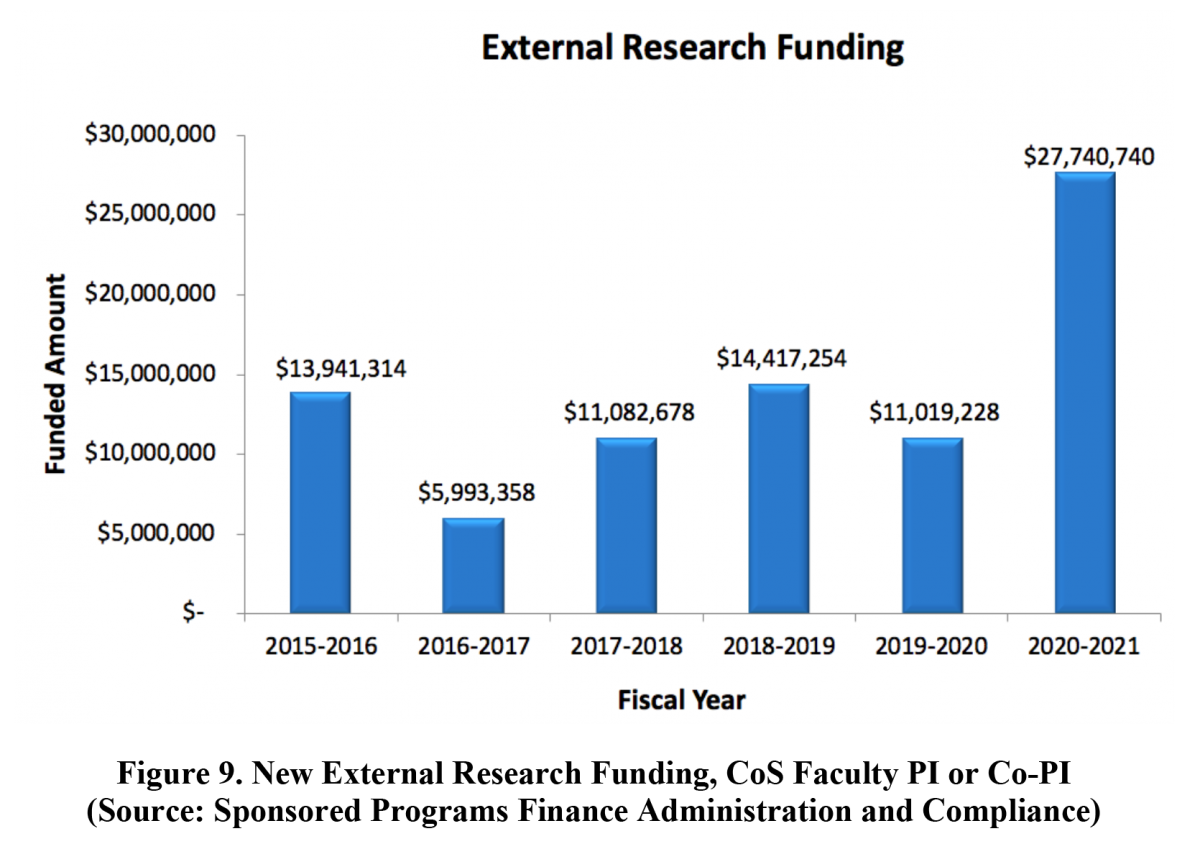 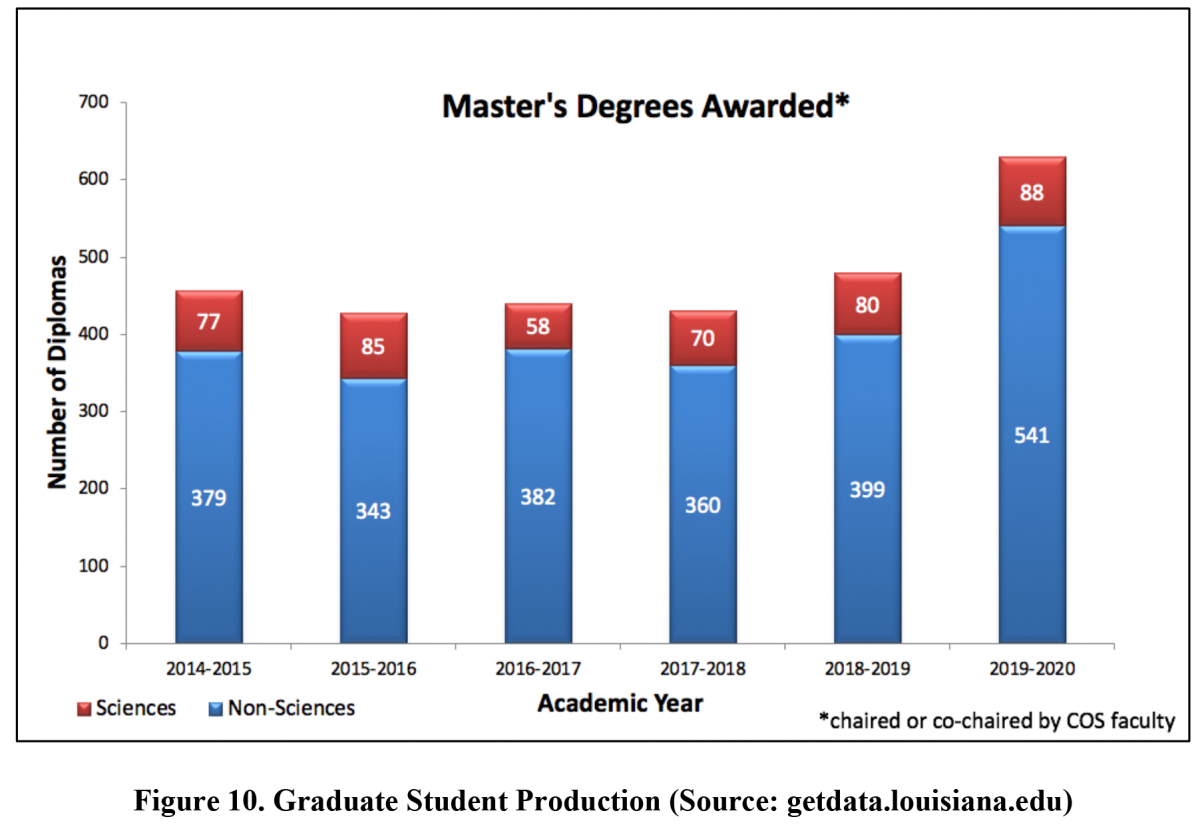 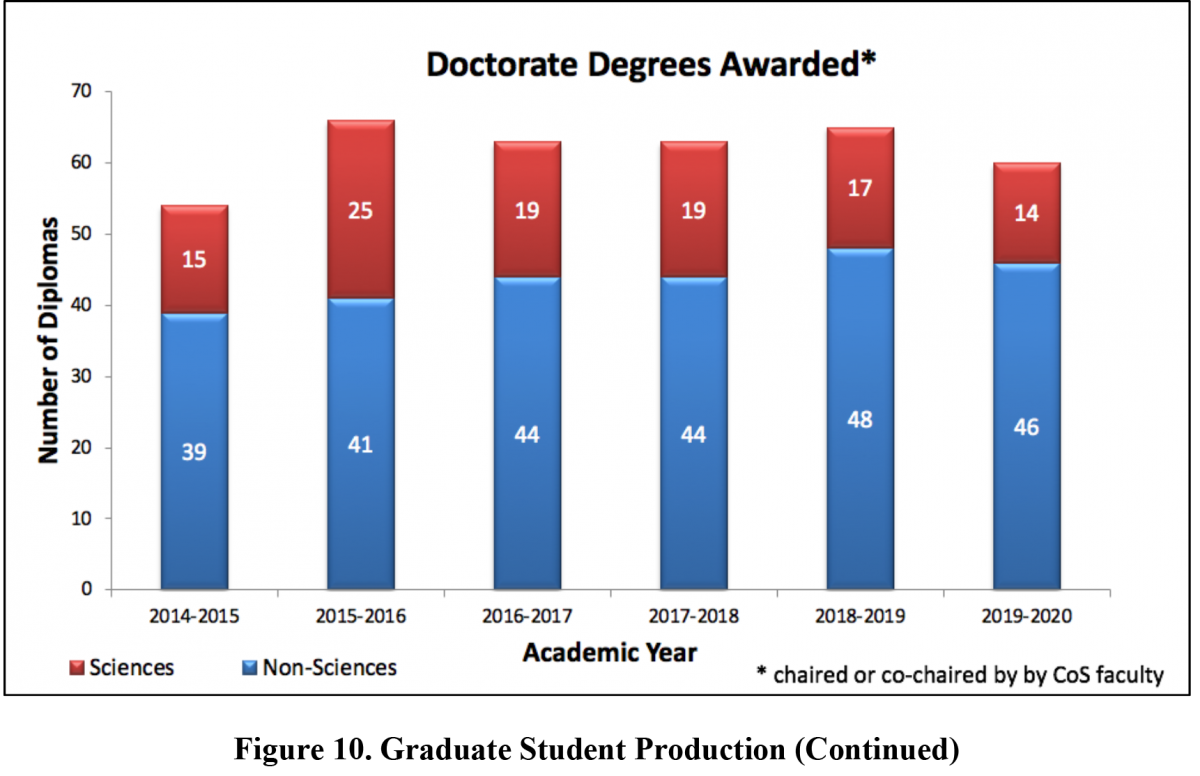 Faculty and students of the Ray P. Authement College of Sciences are a distinguished group of scholars, both within the United States and around the world, as highlighted by the following selected significant awards: