Miao Jin, Associate Professor in the School of Computing and Informatics, is teaming up with four other Louisiana un

Look here for details about a safe return to campus

More than 100,000 preserved crabs, shrimp, lobsters and other crustaceans collected by University of Louisiana at Lafayette researchers over the past four decades are getting new digs: the Smithsonian Institution. The UL Lafayette Zoological Crustacean Collection is likely the largest archive of gene sequence-quality marine decapod specimens from the Americas. It will be relocated to the Smithsonian’s National Museum of Natural History in Washington, D.C., under an agreement signed Friday by Dr. Joseph Savoie, UL Lafayette president, and Carol Butler, the museum’s assistant director for collections. A formal transfer ceremony was held in James R. Oliver Hall on campus. 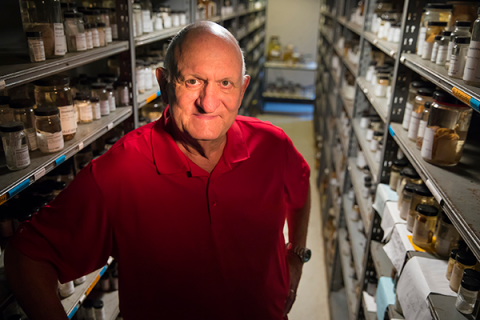 Dr. Darryl Felder worked with graduate students, faculty researchers and other collaborators to build the collection and maintain its specimens, said Dr. Azmy S. Ackleh, dean of the Ray P. Authement College of Sciences. “He is its patriarch,” Ackleh said, noting the biology professor continued to curate the collection even after his retirement in 2014. 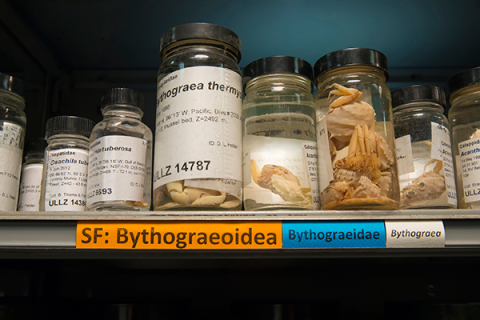 Decapods are a scientific order of crustaceans that encompasses nearly 15,000 species, including lobsters, crabs, crawfish, prawns and shrimp. Five pairs of thoracic legs, equaling 10 limbs, give the order its name; deca is Greek for “10,” while pod means “foot.” UL Lafayette’s specimens are preserved in more than 18,000 containers. The collection also includes a comprehensive electronic database, research notes Felder made during expeditions, and more than 50,000 photographs he took of specimens before they were preserved. Felder said the University had a small number of decapod specimens when he became a faculty member in 1975. Expeditions over the next four decades in the Caribbean Sea, the Atlantic and Pacific oceans, and the Gulf of Mexico increased the collection’s size and geographic diversity. It includes specimens gathered off Cuba, the Bahamas, Mexico, Nicaragua, Belize, Venezuela, Brazil and Colombia, but most are from the Gulf, Felder said. “Some nations now restrict access to sites that were sampled years ago. What we gathered can’t be duplicated, so they are of exceptional value to researchers today.” Much of the collection’s significance is molecular, but it isn’t small. Proper preservation in high-grade ethanol has maintained the specimens’ gene-sequence quality. That means researchers can use the samples’ DNA to track how different decapod species are related, their geographic origins and historical trends. “Many specimens gathered decades ago reflect a moment in time that scientists can use as a baseline to examine changes within crustacean populations in the Gulf and other regions,” Felder said. For example, researchers used the specimens to perform before-and-after analyses to determine how the 2010 BP oil spill affected Gulf crab and shrimp.

The National Museum of Natural History has about 11.3 million crustacean specimens, said Dr. Rafael Lemaitre. He is the curator of crustacea in the museum’s Department of Invertebrate Zoology. While UL Lafayette’s collection includes specimens from other locations, Lemaitre said its emphasis on the Gulf of Mexico and the genetic quality of the samples “will fill in some critical gaps” in the Smithsonian’s present holdings. “This acquisition essentially doubles our holdings from the Gulf. The Smithsonian will now have the most complete representation of decapod species that live there.” Lemaitre has been affiliated with UL Lafayette as an adjunct zoology professor since 1994. He occasionally accompanied Felder during expeditions in the Gulf and Caribbean to gather specimens. He’ll curate them at the Smithsonian once the collections are merged. “It’s very satisfying that everything is going to be in one place. The specimens have been superbly maintained and organized. That will ease the process of incorporating the collection into the museum’s holdings,” Lemaitre said.

Smithsonian technicians arrived on campus earlier this week (14 October 2018)to begin packing the specimens. Dr. Paul Leberg, head of the University’s Department of Biology, said moving the samples from Billeaud Hall to the Beltway will take about eight months. “The Smithsonian would not accept this collection, or any collection, if its researchers and curators did not believe it had substantial scientific value. Their interest and investment shows the University created something pretty special,” Leberg said. Felder and his collaborators secured more than $8 million in federal, state and corporate grants since the early 1980s that funded specimen collection and archival maintenance. Ackleh said the University demonstrated “exceptional stewardship of the collection.” “This has been Dr. Felder’s life work, and it’s a testament to his determination, the quality of the specimens and the care they were given that the Smithsonian has agreed to maintain the University’s collection in perpetuity.”

Main photo: Sicyonia brevirostris, also known as a rock shrimp. Felder photographed this specimen and others before they were preserved. Photo courtesy of Dr. Darryl Felder.

Second photo: Dr. Darryl Felder, a retired professor of biology, stands among specimens that make up the UL Lafayette Zoological Crustacean Collection. He is responsible for the collection's existence. (Photo by Doug Dugas / University of Louisiana at Lafayette)

Third photo: A few of the 18,000 containers that hold the collection's more than 100,000 decapod specimens. (Photo by Doug Dugas / University of Louisiana at Lafayette)