Professors Glen Watson, Karen Smith and Pei-Ciao Tang of our department of biology were featured in the recent Advocate article UL-Lafayette researchers explore how sea anemones could help hearing loss in humans (The Advocate Sep 5, 2016).

Here is an extract to whet your appetite.

A discovery in the treatment of hearing loss made at the University of Louisiana at Lafayette comes from one of the most unlikely of creatures: the humble sea anemone. Professors Glen Watson, Karen Smith and Pei-Ciao Tang have unveiled the fruits of almost 20 years of research exploring how proteins secreted by the sea-dwelling invertebrates to repair hair cells on their tentacles also might be able to repair damaged hair cells in the ears of mammals as well. “In the mid-1990s, we found out that the hairs on sea anemones were vibration-sensitive like the hair cells in the inner ear,” Watson said. “Sea anemones use these hair cells to detect the movements of their prey so they know it’s not inanimate debris that bumped into it and it can sting it.” Watson explained that when the sea anemone goes to sting and eat its prey, its prey will make large movements to try to escape, damaging the hair cells on the anemone’s tentacles. He said methods were found in the late 1990s to damage hair cells that mimicked what is known as overstimulation, or damage to inner hair cells caused by loud noise. “So at that time, I thought, ‘Well, if anybody could get over this kind of trauma, it would be a sea anemone,’ ” Watson said. 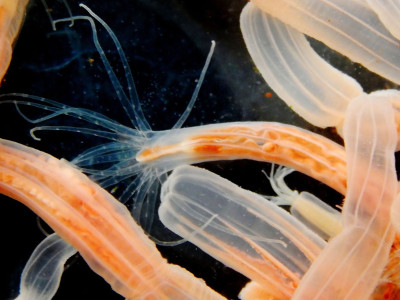 Starlet anemones are pictured in this close-up of an anemone laboratory culture.

Extract from the article "UL-Lafayette researchers explore how sea anemones could help hearing loss in humans", by Dan Boudreaux (The Advocate Sep 5, 2016).  Photo by Glen Watson.