The scholar award is named in honor of Dr. David R. Andrew. Dr. Andrew was the first dean of the Ray P. Authement College of Sciences. He served as dean from 1975 through 1985. Prior to and after serving as dean he was a professor in the mathematics department.

This award is given to a student who maintains a high GPA, is involved in scholarly activities, and still finds time to contribute to the community. 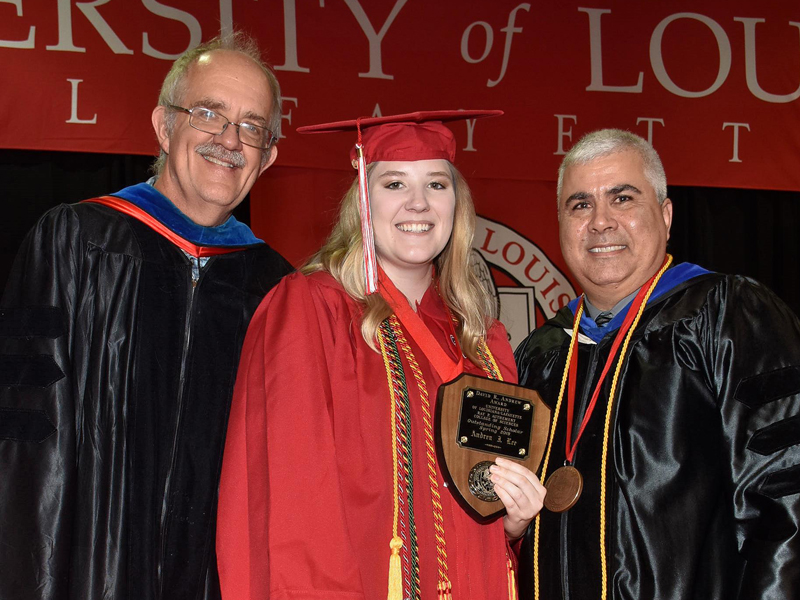 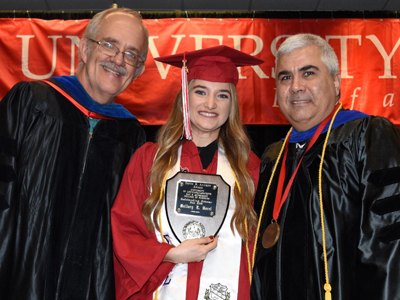 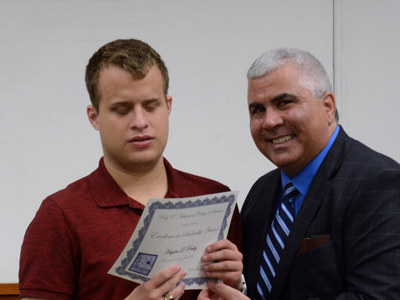 The Spring 2018 David R. Andrew Award recipient is Hayden Presley. Hayden is finishing with a degree in Computer Science, concentration area of Scientific Computing and an official minor in Mathematics. He completed his studies with a GPA of 4.0. 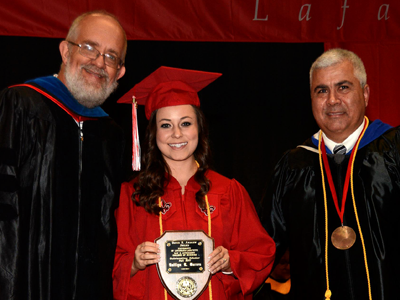 The winner of the David R. Andrew Award is Kaitlyn Warren. Kaitlyn received a degree in Biology, concentration area of Microbiology and an official minor in Chemistry. While at UL Lafayette, Kaitlyn was a member of several student organizations and volunteered her time with various service groups. She completed her studies with a GPA of 3.95. 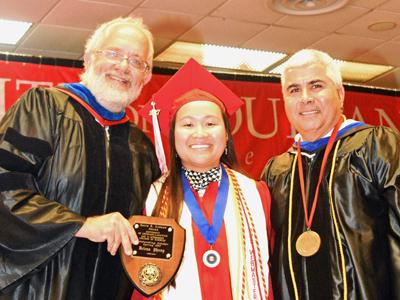 The Spring 2017 David R. Andrew Scholar Award recipient is Delena Phung. Delena has received numerous scholarships and honors during her time at UL Lafayette. She has been on the President's and Dean's Lists, and was inducted into Phi Kappa Phi, Sigma Alpha Lambda, Alpha Lambda Delta honor societies, and National Society for Leadership Success. She has dedicated her time to research activities earning a grant from the Supervised Undergraduate Research Experience Program under the direction of Dr. Sherry Krayesky. She has presented her project at several conferences and is planning to present at an upcoming one. She is a co-author on a paper that was recently approved for publication. In addition to her scholarly activities, Delena was a Board Officer for the Pre-Professional Society, a member of the UL Lafayette Biology Society, the National Alliance for Mental Illness, the Ronald E. McNair Program, Geaux Bike UL Lafayette, the UL Lafayette Soil and Water Conservation Society, UL Lafayette Biology Mentoring Matters, the Torched Metals Art Club, and the UL Lafayette Honors Program just to name a few. She has performed numerous acts of charity and community service as well. She is finishing with a degree in Biology, minoring in Chemistry, with a GPA of 3.95. 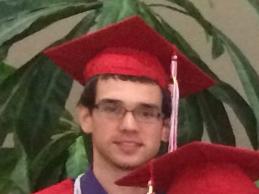 The Fall 2016 David R. Andrew Scholar Award recipient is Austin Hansen. Austin has been on the President's List for seven semesters and the Dean's List for the other two. He is a member of Phi Kappa Phi and held the offices of secretary and vice president for the UL Lafayette Math Society. He competed for 2 years with the UL Lafayette mathematics department team in the Mathematical Association of America regional competition where they placed second in Spring 2016. Austin received numerous scholarships during his academic career but also worked in the Step Labs during the semesters. He is also active in his church in Illinois in the summers and has been a part of Chi Alpha during his first two years here. In his junior year Austin changed his major from guitar performance to mathematics. He is finishing with a degree in Mathematics with a GPA of 3.86. The Spring 2016 David R. Andrew Scholar Award recipient is John Patterson.  John is receiving two degrees today, one in Mathematics and one in Computer Science. While completing these degrees, John has worked as a campus tour guide, developed software and courseware for the University, worked as a software developer for Golfball.com, and currently works as a software developer for Acadian Ambulance.  He has been President of the UL Lafayette Math  Society for two years, has worked on undergraduate research in Mathematics, and represented the Math department in the student team competition at the Mathematical Association of America Louisiana Mississippi regional conference three years in a row, where they placed second twice and first once. These are just a few of the reasons John was selected for this award.  John is finishing his two degrees with a 3.937 GPA. 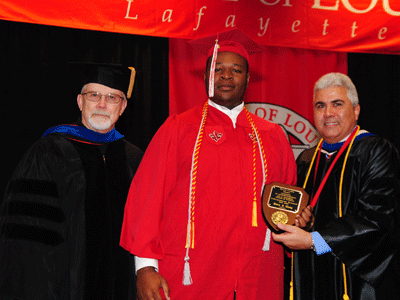 The Fall 2015 David R. Andrew Scholar Award recipient is Uwem Sam Ekong. Sam is also the recipient of the Fall 2015 Bradd Clark Excellence in Research Award. Sam received a degree in Computer Science with an official minor in Mathematics. He has been on the President's List or Dean's list his entire college career. He received the African American Achievement Award from the Black Faculty and Staff Association and was nominated for the Golden Eagle in Technology. Sam is a member of the Honors program, the UL Lafayette Marching Band, the Association for Computing Machinery, and the STARS program. He has also worked on multiple research projects during his academic career and plans to continue that research in graduate school. Sam is finishing his undergraduate studies with a 3.888 GPA The Spring 2015 David R. Andrew Scholar Award recipient is Amy Dekerlegand. Amy received a degree in Biology with an official minor in Chemistry. She has been on the President’s List her entire college career and held both the UL Lafayette Outstanding Student Scholarship and the TOPS Honors Award. She is a member of the Honors Program, Peer Mentors and the Pre-Professional Society. For the past year, Amy has participated in an undergraduate research program in the Biology Department. She has also been a volunteer pharmacy technician at Lafayette Community Health Care clinic. Amy is finishing her undergraduate studies with a 4.0 GPA. She plans to go to medical school and specialize in internal medicine. 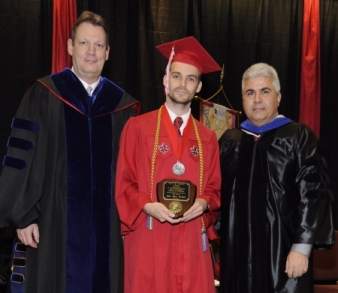 The Fall 2014 David R. Andrew Scholar Award recipient is Jade Bujard. Jade transferred to UL Lafayette in 2012 with 45 credit hours completed in a different major. He then changed his major to Geology. He will be finishing with an almost perfect 4.0 GPA in his course work from UL Lafayette. Jade was awarded numerous scholarships and has been active in several geological societies both on campus and off. He will finish with a 3.765 GPA and plans to attend graduate school for a Master's in Geology. 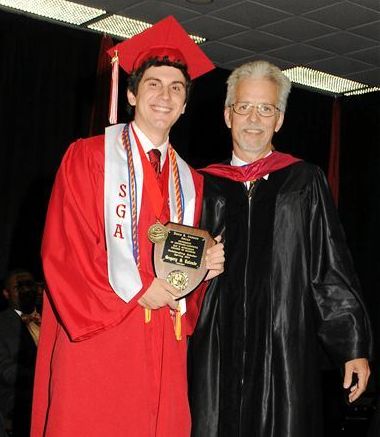 The Spring 2014 David R. Andrew Scholar Award recipient is Gregory Lalonde. Gregory was the recipient of the Thomas C. Darcy, M.D. Endowed Scholarship, the UL Alumni Association Scholarship for the College of Sciences, an SGA scholarship and the Pi Kappa Alpha Academic Scholarship. A member of the UL Lafayette Honors Program, he was also a member of four honor societies: Sigma Alpha Lambda, Phi Kappa Phi, Order of Omega and the Blue Key Honor Society of which he was also Treasurer. Gregory has been on the Dean's or President's List his entire academic career. He received the Outstanding Junior Award and the Pi Kappa Alpha Brotherhood Award. He has been very involved with various University Organizations including Pi Kappa Alpha, Student Government Association, UL Lafayette Lyceum Committee, UL Lafayette Housing Appeals Committee, and the Pre-Professional Society. Gregory was also participated in many community services activities including volunteering at Lafayette General Medical Center, Habitat for Humanity, Taylor Trudeau Cycle for Life, Faith House Canned Food Drive, Rebuilding Together Acadiana, Festival International de Louisiane, Games of Acadiana, St. Joseph's Diner and Campus Cleanup. During his time at UL Lafayette, he was hired to work as an Undergraduate Research Assistant in the labs of two biology professors. Gregory graduated with a degree in Biology with an official minor in Chemistry. He finished with a GPA of 3.973.

The Fall 2013 David R. Andrew Scholar Award recipient is Daniel Gould. Daniel is also the Fall 2013 Outstanding Graduate for the Ray P. Authement College of Sciences and you may read about his many accomplishments our Outstanding Graduate page. We would like to emphasize just a few of these accomplishments that impelled the committee to choose him for the scholar award. To start, he  finished his Chemistry degree with a perfect 4.0 GPA. This past summer, he attended a two month Animation Fundamentals Program at Capilano University in Vancouver, British Columbia where he maintained a 4.24 GPA. Daniel has been an active member of the Honors Program, having presented 5 voluntary seminars. His seminars were twice voted as the Outstanding Seminar by his fellow honors students. He has been involved with the Bio-Math Research program and is the current President of the UL Lafayette Chapter of AmeriCorps. A well rounded student, Daniel is the epitome of an Outstanding Scholar.

The Spring 2013 David R. Andrew Scholar Award recipient is Logan Perry. Logan was the recipient of the TOPS Honor Scholarship, a UL Academic Scholarship, the Spanish Trail Mathematics Scholarship and the Oran Robert Perry Burke Memorial Scholarship. He has been on either the President's List or Dean's List throughout his course of study. He is a member of Phi Kappa Phi and Sigma Alpha Lambda honor societies as well as the UL Lafayette Honor Society. Logan was the founding President of the UL Lafayette Mathematical Society and a member of the Mathematical Association of America, the Society of Industrial and Applied Mathematics and the American Mathematical Society. He was chosen to represent UL Lafayette at the 2012 and 2013 Louisiana/Mississippi Regional Mathematical Association of America meetings. At the 2013 meeting, Logan placed second in the Student Paper Competition and along with his teammates placed fourth in the Student Team competition. He was a tutor at the Learning Center on campus and received Center for Reading and Language Arts Certification. He was also a private tutor for Biology, Mathematics, Psychology and Statistics. Logan has completed an undergraduate honors thesis titled "Chaos in a two stage ecological model with strong nonlinearities". He has made a presentation on some of the findings of that thesis at the Third UBM South Regional Conference at the University of Houston-Downtown. Logan received an Honors Baccalaureate in Mathematics with a double major in Political Science. He finished with a GPA of 3.932.