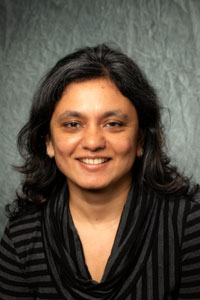 Manavi Jadhav, PhD, joined the Department of Physics at the University of Louisiana at Lafayette as an assistant professor in August 2018. This is not her first appointment at UL Lafayette; Dr. Jadhav was a visiting assistant professor in Physics during the 2015-2016 academic year. Originally from Pune, India, she received a B.Sc. from Fergusson College, India in 1996 and a M.Sc. from the University of Pune, India in 1999. Dr. Jadhav then earned two M.S. degrees from Ohio University, an M.S. in Physics and Astronomy in 2002 and an M.S. in Geophysics in 2003. Next she relocated from Ohio to Washington University in St. Louis where she received an A.M. (in 2006) and Ph.D. (in 2009) in Earth and Planetary Sciences. Dr. Jadhav comes to UL Lafayette following postdoctoral research positions at the Laboratory for Space Sciences, Washington University in St. Louis, the W. M. Keck Cosmochemistry Laboratory, Hawai‘i Institute of Geophysics and Planetology, University of Hawai‘i at Mānoa, the Robert A. Pritzker Center for Meteoritics and Polar Studies, The Field Museum of Natural History, Chicago, and the Department of the Geophysical Sciences, The University of Chicago.

Dr. Jadhav is a cosmochemist and a laboratory astrophysicist. Her academic interests are in presolar (stardust) grains, isotope cosmochemistry, stellar nucleosynthesis, dust formation in circumstellar and interstellar environments, meteoritics, and early solar system processes. She specializes in the laboratory analysis of stardust grains that are found in meteorites. The analytical techniques she commonly uses to analyze stardust are, but are not limited to, secondary ion mass spectrometry (SIMS), resonant ionization mass spectrometry (RIMS), synchrotron x-fluorescence and tomography, and electron microscopy (SEM, TEM). Studying stardust in the laboratory allows her to understand the materials that made our Solar System. She deciphers the history of the grains and uses them as tools for enhancing our understanding of the physical conditions and processes operating in each of the environments to which the grains were exposed to during their lifetimes. This involves developing an understanding of their origins in stellar outflows, residence time in the interstellar medium, introduction into the protosolar nebula, incorporation into the solid bodies of the early solar system, and eventually, their survival in the various kinds of meteorites.