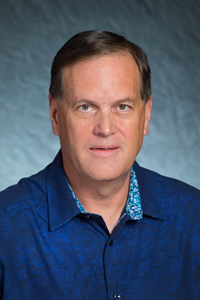 Bruce Wade, PhD, joined the Department of Mathematics at the University of Louisiana at Lafayette as Professor and Head in August 2018. Originally from Milwaukee, Wisconsin, and having lived there for 47 years, Dr. Wade is very excited to have the opportunity to experience living in Lafayette. His interests include playing and coaching soccer, bicycling and fitness, golf and tennis, travel, and motorcycling.

Bruce A. Wade earned a Ph.D. degree in Mathematics, specializing in Numerical Analysis, at the University of Wisconsin-Madison in 1987. During 1987-89 he was at the Department of Mathematics at Cornell University for a post-doctoral research fellowship. In 1989 he joined the Department of Mathematical Sciences at the University of Wisconsin-Milwaukee as an Assistant Professor. Promoted to Associate Professor (1995) and Professor (2006), he also served many years at UW-Milwaukee in the capacity of Associate Chair, as well as Founder and Director of the Center for Industrial Mathematics. Dr. Wade was the UW-Milwaukee Mathematical Sciences Department Chair during 2017-18.

Dr. Wade's research interests as an applied mathematician are broadly aimed at developing algorithms and analysis for partial differential equations. Additionally, he is active in computational mathematics (simulations in application, PDE models, optimization), industrial and interdisciplinary mathematics. The development and analysis of efficient numerical schemes for nonlinear Advection-Diffusion-Reaction Systems is a very important part of the scientific endeavor due to the significant applications across different disciplines of reaction-diffusion models. These systems of partial differential equations model many types of phenomena, for example, in biological and medical sciences, chemistry, engineering, financial mathematics, and physics. Some well known examples include the Black-Scholes (finance), Fitzhugh-Nagumo, Nonlinear Schroedinger (nonlinear waves, optics), and Kuramoto-Sivashinsky (engineering & physics) equations. The challenge is to construct efficient numerical algorithms which resolve these equations in two and three dimensions while at the same time preserving important properties of the underlying PDE model or avoiding spurious errors due to low regularity or mismatched initial and boundary conditions. Rigorously analyzing the schemes which are developed for nonlinear partial differential equations remains a top priority in this research program.