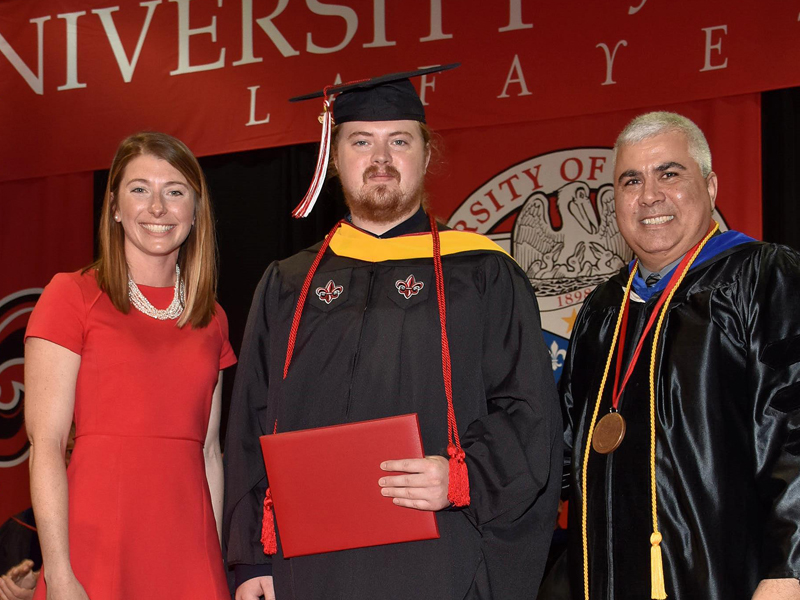 Brennan Brunsvik is the Spring 2019 Outstanding Master’s Graduate for the Department of Geology. 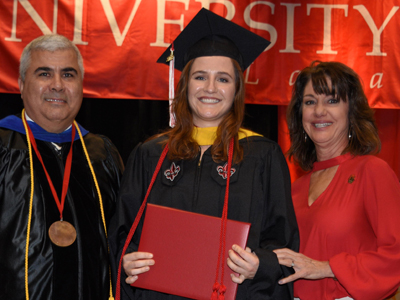 Elizabeth Barron is the Outstanding Master’s Graduate for the Department of Biology. She has a 3.72 GPA. Her master’s thesis examined the predatory performance of king snakes, which perform a valuable ecological service by consuming rodents. Barron volunteered at the U.S. Geological Survey Wetlands and Aquatic Research Center and at the Louisiana Department of Wildlife and Fisheries. In both roles, she surveyed emerging wildlife diseases and assessed the status of the Louisiana pine snake, which the federal government classifies as threatened. Barron is a member of the American Society of Ichthyologists and Herpetologists and the Society for the Study of Amphibians and Reptiles. Following graduation, she plans to work as a private lands biologist. Barron earned a bachelor’s degree in animal, dairy and poultry sciences in 2016 from LSU in Baton Rouge. She is the daughter of Geralyn and Richard Barron of Lafayette. 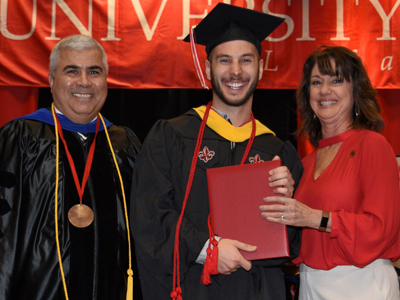 Adam J. Trahan is the Outstanding Master’s Graduate for the Department of Physics. He has a 4.0 GPA. His thesis examined how low-frequency acoustic waves spread inside cloud layers on the planet Venus. Trahan presented his research at the 2018 national meeting of the Acoustical Society of America. He represented the Department of Physics in UL Lafayette’s Graduate Student Organization, and served as treasurer of the Society for Physics Students’ campus chapter. Trahan earned a bachelor’s degree in physics in 2016 from UL Lafayette. While an undergraduate, he interned at the Naval Surface Warfare Center’s Carderock Division in Bethesda, Maryland. He also worked as a bioassay analyst at a materials technology company in Lafayette. Following graduation, Trahan hopes to work at NASA’s John C. Stennis Space Center in coastal Mississippi. He is the son of Nancy Duhon of Abbeville, La. 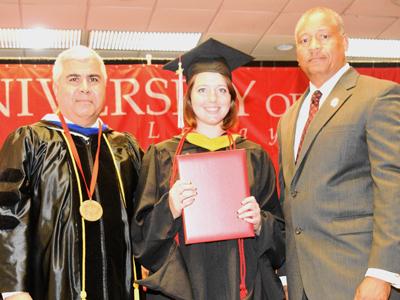 Katrina Hucks is the Outstanding Master's Graduate for the Department of Biology. She has a 3.81 GPA.

Her research examined the effects of coastal change, including sea level rise, on five species of birds in coastal Louisiana. As a research assistant in the Department of Biology, she served as an intern with the Louisiana Coastal Protection and Restoration Agency. Hucks volunteered with the Audubon Society, and assisted in bird sampling and outreach education at Palmetto State Park near Abbeville, La., and at Bluebonnet Swamp Nature Center in Baton Rouge, La. She also worked as a camp counselor at a youth camp in her native Oklahoma, where she taught middle-school children about forest ecosystems. Hucks conducted bird surveys for Malheur National Wildlife Refuge in southeastern Oregon, where she assisted in banding ducks, pelicans and terns. She published four scholarly journal articles, including one as its principal author. She is the daughter of Kerry and Karen Hucks of Oklahoma City, Okla. She holds a bachelor's degree in biology from the University of Central Oklahoma in Edmond. 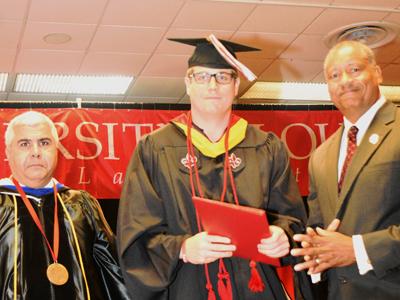 Samuel Ely is the Outstanding Master's Graduate for the School of Geosciences. He has a 4.0 GPA.

Ely's thesis focused on the geologic and geochemical compositions of the Millboro Shale, a thick sequence of rocks that holds oil and gas accumulations in West Virginia's Appalachian Mountain basin. He led UL Lafayette's team during the American Association of Petroleum Geologists' Imperial Barrel Award competition, an annual exploration contest for geoscience graduate students. The University's team took first place in both the international and Gulf Coast categories. He is a working geoscientist and has been employed by Cabot Oil and Gas in Pittsburgh, Pa., since 2015. He previously worked as a geologist for Selman and Associates in North East, Pa. He is the son of Dean and Robin Ely of Marietta, Ga. He earned a bachelor's degree in geology from Colgate University in Hamilton, N.Y., where he played varsity football and varsity lacrosse. 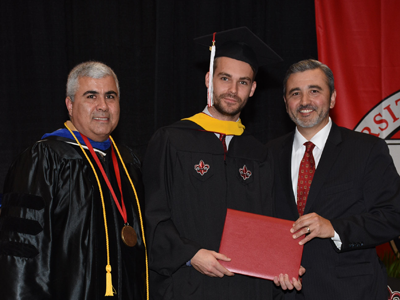 Jade Bujard is the Fall 2016 Outstanding Master's Graduate for the School of Geosciences. He has a 3.88 GPA.

Bujard's thesis explored potential petroleum prospects off the coast of New Zealand. He located an area of interest using seismic and geophysical techniques. He has presented those research findings to industry professionals in Houston and to the Louisiana Gulf Coast Oil Exposition. Bujard was a member of a UL Lafayette team that placed second in the Gulf Coast Region of the International Imperial Barrel Award competition. As part of the global contest, university students spend two months analyzing data to determine the best place to drill for oil. He interned with three resource exploration companies in Lafayette. Bujard is a member of several professional organizations, including the University's Geological Society, the American Association of Petroleum Geologists, the Society of Exploration Geophysicists, the Lafayette Geological Society, and the Southwest Louisiana Geophysical Society. He is the son of Stanton and Melissa Bujard of Youngsville, Louisiana. His thesis centered on fieldwork conducted at the Eagle Ford Formation, sedimentary rock from the Cretaceous Period in portions of Texas. Shane was instrumental in obtaining permission to access choice outcrops on privately owned land. He performed geochemical analysis of rock samples in Lozier Canyon, near Del Rio, Texas. Samples were analyzed for variations in trace metals, organic content and oxygen levels. Identifying subtle changes in such sedimentary rock depositions could lead to a better understanding for locating "sweet spots" for horizontal drilling for oil and gas. Shane was a member of a team that placed second in the Gulf Coast Region of the International Barrel Award contest. As part of the global competition, university students spend weeks analyzing data to determine the best place to drill for oil.

He holds a bachelor's degree in geology from Texas A&M University.

Shane is the son of Eric and Jena Shane of Beeville, Texas.